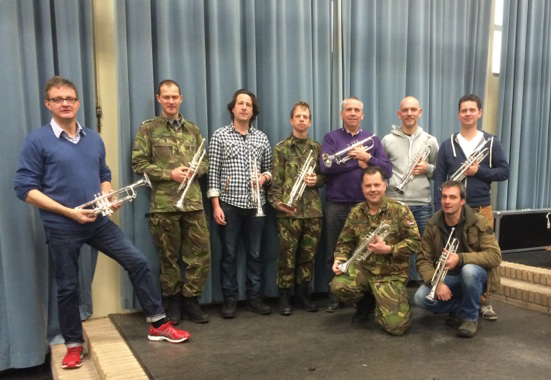 The Orchestra “Bereden Wapens” (literally: Mounted Weapons) or Military Bicycle Band of the Royal Dutch Army is made up of 22 musicians who are stationed at the Van Brederode barracks in Vught. This long established music corps not only performs in Holland at official ceremonies such as the state opening of parliament, visits by dignitaries from abroad, royal weddings, state funerals and the like, but also travels abroad to participate in military tattoos, veterans’ days, and concerts.

Their repertoire stretches from traditional fanfares to popular music, swing, jazz, folk and film music. The band members keep the time-honoured traditions alive by wearing uniforms that were originally issued in 1914, and this is the reason that they often also perform on bicycles – a special treat for spectators!

Ever since 2009 the entire trumpet section of the band has played on Van Laar flugelhorns. The musicians are so satisfied with their instruments that they have now ordered new Van Laar trumpets, which were delivered personally by Hub himself (see photo).